This is Catherine Ryan Howard’s first crime novel and is now a couple of years old. Her second, The Liar’s Girl, will be coming out in a few weeks. [Update: I’ve now posted my review of The Liar’s Girl.]

In Distress Signals she does a very impressive job of engaging the reader’s sympathy for characters who would normally be frankly dislikable. The story contains passages about the childhood of a psychopath which had me numb with sadness and shock at how simple bad luck can amplify the effects of the world’s (and families’) cruelty towards children. The narrator of the main thread of the story, Adam, is a confessed coward and procrastinator, not to mention a freeloader.

For ten years, he’s been relying on his girlfriend, Sarah, to pay the rent and the bills while he’s been pursuing his ambition to become a Hollywood scriptwriter. When Sarah fails to return from a few days in Barcelona, he’s forced to face up to the fact that he’s become a rather pitiful figure. (I must admit that I recognized a lot of myself in him.)

Then there’s Rose, Sarah’s best friend, who tells Adam a few home truths about his character and his relationship. Unfortunately, she chooses to do this just at the moment when it’s hit him that Sarah is missing and presumably in danger, if she’s not already dead. And that she had been planning to leave him for a man she’d met through work.

A minor, but well drawn character is the policewoman who seems inexperienced at first but proves adept at manipulating the feelings of Sarah’s father, while following procedure scrupulously. There are two other characters who do appalling things to relatively innocent people. They have their reasons, and this reader, at least, sympathized with those reasons — while recognizing that they weren’t quite good enough.

So, Distress Signals is compelling as a character study. As a piece of plotting, it’s a knockout. Adam discovers that another woman disappeared from a cruise ship in the Mediterranean just a year before Sarah did and in weirdly similar circumstances. Both women’s passports were posted home from Nice with a note saying “Sorry” and signed with an initial. How could this be possible? If Sarah had still been alive, why would she have wanted to be without her passport? If she’s been killed, why would the killer want to draw attention to the fact that she no longer needed it? The solution is ingenious and satisfying. 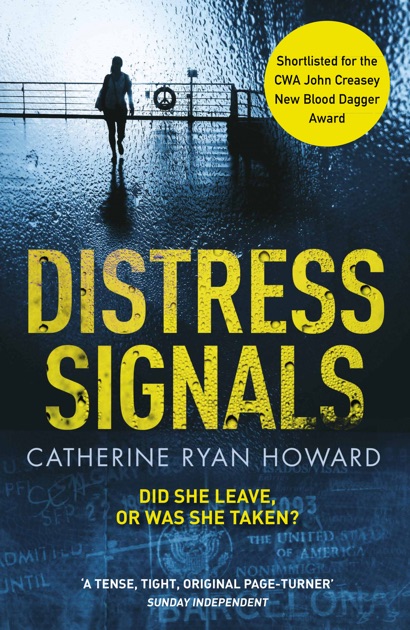