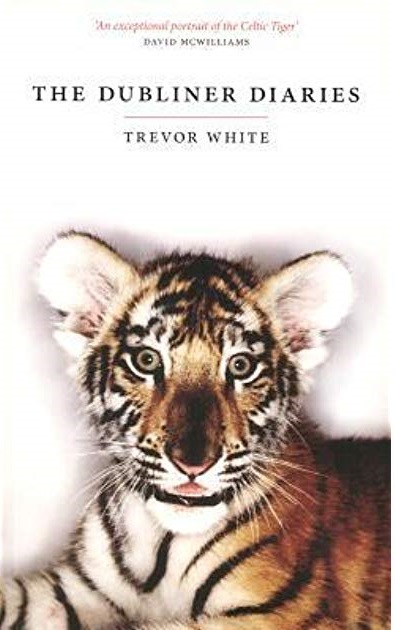 I remained oblivious to the existence of The Dubliner magazine until, a few weeks ago, I picked up this book in a charity shop. The magazine was founded in 2001 by the book’s author, who had seen the need for a new Irish publication to cater to a changing metropolitan demographic. The country had then enjoyed several years in a row of extraordinary economic growth. Unfortunately for Trevor White, while the growth would continue for several more years, its nature was about to change fundamentally. Previously driven by foreign investment, new tech skills and the fact that Ireland is an anglophone country within the EU, the expanding economy was about to switch tracks, onto the familiar roller coaster ride of property speculation with — eventually — catastrophic results. Unfortunately for Mr White’s timing, the readership he aimed at — smart, well-educated, curious and flush with cash — would never grow as large as he’d hoped.

It wasn’t just the stupid economy, of course. White quotes one perceptive observer who says that White could have been a serious journalist if he’d chosen a subject matter and dedicated himself to it. It’s an evaluation that’s borne out by reading the book. Among the social gossip and helicopter trips to the races, there are penetrating judgments on such matters as the citizenship referendum of 2004 (“The Citizenship Referendum stinks. Why pretend that it didn’t pander to racists? I wanted to make that point in public, so …”) and Declan Ganley’s well funded intervention in another referendum campaign, that on the Lisbon Treaty.

It’s for these moments (as well as for White’s engaging writing style) that the book is of value to me. In 2004, I’d been living in London for 17 years. Not too far to make the occasional trip home and, since 1996, I’d been keeping up with events by reading the Irish Times on the internet. Yet one misses a lot of nuance and atmosphere and when I came back to live in Ireland long-term towards the end of 2011, I was to find the country’s distorted familiarity strangely disconcerting. White’s book has been very useful to me in filling in the gaps.

When I’d lived in Ireland in the 80s, I’d had more than a passing interest in defamation actions. However, the fact that, in 2006, The Dubliner had gravely libelled Elin Nordegren, a Swedish former model, completely passed me by. The libel was cruel, reckless, crudely misogynist and ultimately very costly. It was also bizarrely pointless: the magazine’s true target seems to have been golf’s Ryder Cup, which was to visit the K Club in County Kildare that year. White does not mention Ms Nordegren by name, nor does he give details of the case (being presumably bound by a confidentiality clause in the settlement).

The large payout didn’t do for the magazine immediately but must have weakened it in the long term. One factor which seems to have buoyed it up a bit was the annual publication of The Dubliner 100 Best Restaurants. White admits that it was a struggle to find 30 good ones. This encapsulates the tension that seems (on the evidence of this book) always to have been at the heart of White’s enterprise: the journalistic impulse to criticize the monstrous aspects of the society he observed, while at the same time needing to flatter it enough to get it to pay his bills. It’s no surprise that he couldn’t get the balance right in the long term. That he held on for 8 years or so is quite impressive.

I’ve no regrets about never having seen The Dubliner in its heyday, but I’m glad it existed. Reading this account of its heyday, on the other hand, has been an enlightening pleasure.