Why I don’t trust Bookshop.org

I haven’t always been convinced that independent bookshops are a vital part of our culture. I wrote about my ambivalence two years ago. I was already leaning steeply towards the view that indie booksellers are necessary, they’re under threat and we need to do whatever we can to keep them in business. In the two years since, I’ve come down firmly on that side.

The threat still comes from Amazon, who still dominate the market for books and act like a ruthless predator in that market and others. In my earlier post, I didn’t mention Bookshop.org, a company which positions itself as the antidote to Amazon. I may not have heard of it at the time, as its operations were confined to the United States then. It opened a UK division at the end of 2020. If I had heard of it, I probably hadn’t looked closely at its method of carrying out those operations.

Bookshop.org says its mission is “to financially support local, independent bookshops”. The way it goes about doing this is a bit surprising. When you buy a book through Bookshop.org the order goes from that website straight to the book wholesaler (that’s Gardners in the UK) who dispatch it to you. The actual independent local bookshop isn’t directly involved in the transaction and the book doesn’t come out of its own stock. In fact, it doesn’t even see the book. However, when you visited the Bookshop.org site, you were asked to choose a bookshop and then brought to the “virtual storefront” of your choice. If you ordered the book through that virtual storefront, the corresponding bookseller will get a 30% cut of the book’s price. The independent bookseller is not a necessary part of this system. There’s something obviously artificial about its involvement.

The 30% that Bookshop.org pays is less than a bookseller would normally get from a book sold directly in their physical shop. According to this New Statesman story, they would usually expect between 42% and 50% of the price. In that case, though, the bookseller would have to order and stock the book and make place for it on their shelves. In the case of the Bookshop.org sale, they don’t have to do any of that, so arguably the smaller percentage is a fair cut.

The New Statesman piece, which appeared only a month after Bookshop.org opened in the UK, and might not reflect the present position, suggests that Bookshop.org may not so much be taking customers away from Amazon as drawing them from the very bookshops it’s supposed to be supporting. Is it possible that the people buying through Bookshop.org are largely the people who would otherwise have bought the book over the counter in a physical shop?

I haven’t bought anything through Bookshop.org myself. I no longer live in the UK, and I don’t particularly want to test whether the wholesalers will post to Ireland. More importantly, I suspect that there are more effective ways to support independent local bookshops. I now live 11 Km from Westport, in County Mayo. That town has at least four bookshops that I can think of off the top of my head, including the inviting Tertulia. Castlebar, just a little further away, has the excellent Castle Books. Even the small town of Louisburgh is well served by Books at One (pictured). I’ve been to Galway four or five times this year and bought books in several shops there. 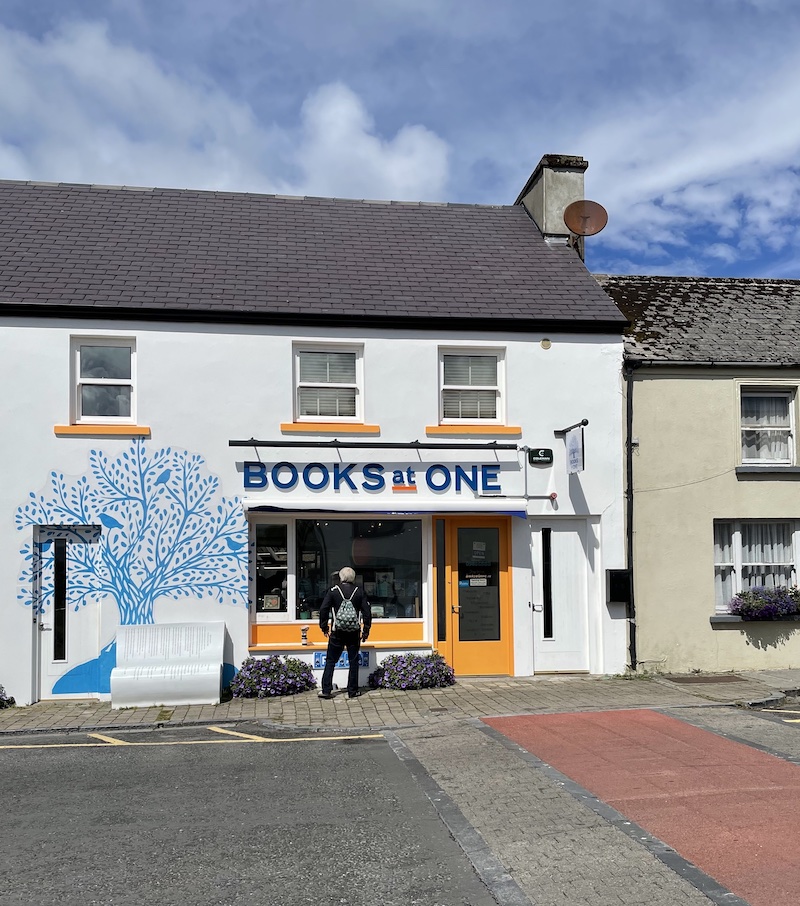 If I can’t immediately find a book that I want in a local shop, I tend to look online first at Kennys in Galway. In the past, if I still couldn’t find the book on Kennys’ site, I’d try Alibris, though I’ve been avoiding them recently for reasons that are not directly relevant to the subject of this post.

In practical terms, I suppose my opinion doesn’t count for much. I live in a place that isn’t covered by Bookshop.org and that is well served by a choice of independent bookshops. But it bothers me that an initiative that has been hailed as great news for booksellers may not in the end turn out to be as effective as has been suggested.