A good masculinity is hard to find

In part 1 of this series of posts, I recalled that a trans woman who commented on an old post of mine had two main points to make against it. First, if I didn’t want to be described as “cisgender”, it was up to me to come up with an alternative term. The phrase I eventually settled on is “antimasculine male”, and I’ll have more to say in part 3 about why I've adopted that terminology. Her second point was that my post was entirely focused on gender roles, and that I “needed” to think about gender identity too. That’s the point I want to deal with in this part.

She was right: I hadn’t until then thought about gender as identity, though I had been thinking regularly (sometimes, it seemed, almost obsessively) about gender for at least thirty-five years. So I began to try to look at the subject from this new perspective.

I found that I was contemplating gender identity from the point of view of an outsider. I quickly discovered that a sense of gender identity is something that I personally don’t have, which is one good reason why I’d never previously paid it any attention. I’ve speculated that this might be because I don’t have a visual imagination (or, in consequence, any kind of visual self-image). I haven’t been able to find a completely convincing answer to that puzzle, but I have learned that the “lack” of a sense of gender identity isn’t all that unusual.

But thinking about gender identity from this outsider’s viewpoint has led me to speculate whether the astonishing virulence and vituperation of the online (and real-world) battles between so-called TERFs (mainly veteran feminists), on the one hand, and trans rights activists on the other has to do with a clash of contested identities.

When I was a teenager and in my early 20s in 1970s Ireland, it was vanishingly rare to hear an adult human female described as a “woman”. If she was under, say, 38, she was most likely to be a “girl”. Alternative terms were bird, chick, dollybird, cheescake, a bit of fluff/stuff and so on ad infinitum. There were fewer terms for older women but for the most part they didn’t include “woman”: auld wan (one) and auld biddy are the first two that come to mind. I can remember as a 20-year-old in university, feeling awkward about using the word “women” in relation to my female fellow students when “girls” seemed to be the more socially permissible term. Even today, there are some circles in which I’m cautious about calling a woman who plays a role on stage or screen an “actor”, in preference to the diminutive form of that word which is still commonly imposed on female dramatic performers.

In short, the identity of “woman” wasn’t one that the adult human females of the 1970s and 80s could expect would be easily accorded to them as their birthright. It had to be asserted, struggled for, fought over and repeatedly, exhaustingly, interminably insisted upon. Is it surprising that the women who played a part in establishing that identity should now be unwilling to give it up easily?

If you read J K Rowling’s recent post as she wrote it, rather than through the lens of trans rights activists’ assumptions about the kind of thing a TERF is likely to say, I think it’s clear that her concern is not to express bigotry towards or hatred of trans people but rather to protest against the erasure of the hard-won identity of “woman” as meaning adult human female. Here is some of what she has to say:

We’re living through the most misogynistic period I’ve experienced … Never have I seen women denigrated and dehumanised to the extent they are now. From the leader of the free world’s long history of sexual assault accusations and his proud boast of “grabbing them by the pussy”, to the incel (“involuntarily celibate”) movement that rages against women who won’t give them sex, to the trans activists who declare that TERFs need punching and re-educating, men across the political spectrum seem to agree: women are asking for trouble. Everywhere, women are being told to shut up and sit down, or else.

You might not agree that the present state of the world threatens and attacks women (women in general, that is, not only trans women) but you surely must accept that Rowling has good reasons for her concerns. And, if you think that that calling out “trans activists who declare that TERFs need punching” is inexcusable exaggeration, just search Twitter for “punch a TERF” and prepare to be appalled. What you will see is the threat of (sometimes extreme) violence against people who are unquestionably women by people who (though some of them repudiate a male identity) are behaving in an undeniably masculine manner. Rowling adds:

It’s also clear that one of the objectives of denying the importance of sex is to erode what some seem to see as the cruelly segregationist idea of women having their own biological realities or — just as threatening — unifying realities that make them a cohesive political class.

It should be obvious from this that her purpose is not to be horrid to people who are struggling bravely under the burden of gender dysphoria, but to assert the importance of women (in the admittedly contested sense of human females) as an indispensable political force in a world that’s facing a whole series of crises.

Twitter is obviously not the ideal place to conduct a nuanced argument but even by its standards there’s been a remarkable amount of “reading in” to her tweets. In the one that sparked the current shouting match, she suggested that phrases like “people who menstruate” (or, by analogy, “pregnant people”) tend to erase women’s identity. Is she wrong?

I haven’t discussed the subjects of menstruation or the possibility of pregnancy with any trans men, but I’m fairly certain that for most trans men menstruation and pregnancy are not essential parts of their identity or self-conception. I doubt very much if many of them would feel offended or excluded by the use of terms like “menstruating women” or “pregnant women”. It’s clear, surely, that the overwhelming majorities of people who menstruate or who are pregnant are going to be women, so why should it be considered hateful or bigoted to talk about “women” in this context, unless as part of a project to make adult females less visible?

I hope I don’t need to point out that it’s a logical fallacy to infer that because people who menstruate are (by and large) women that therefore all women menstruate. But of course Rowling’s tweet about menstruating people wasn’t her only “offence”. I’m tempted to go into her expressed views about Maya Forstater’s sacking or the difficulties faced by detransitioners, but I’m afraid that each of these subjects would require its own post. 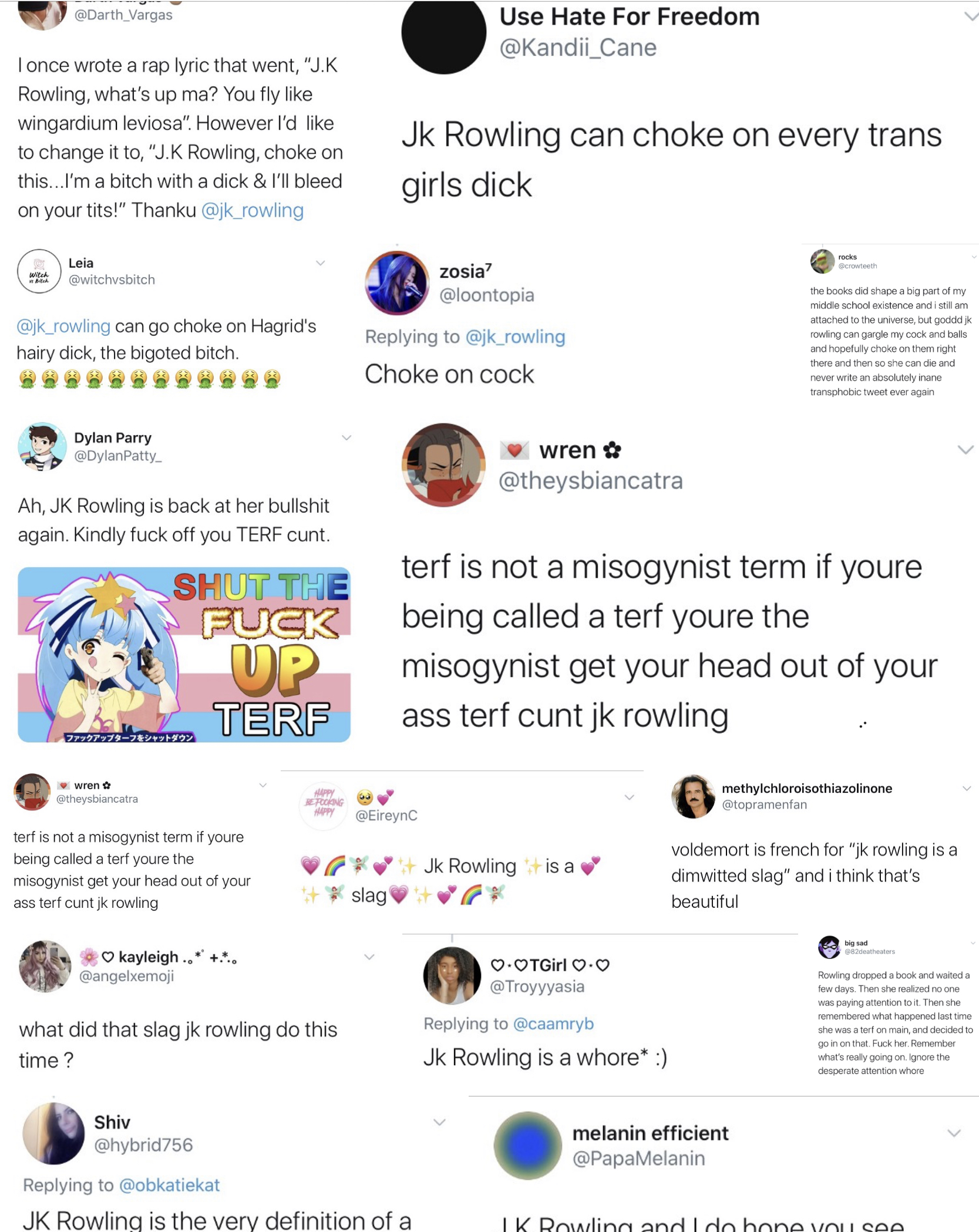 So instead, I’d like to return to the question of misogyny. There’s a Medium post by boodleoops who assembles a collection of screenshots of the Twitter attacks on Rowling. Some of them can be seen in the image above, but there are many more, and worse. Tweet after tweet tells Rowling to “shut the fuck up”, describes her as a TERF and a cunt, speculates as to how much her “pussy” stinks and/or has dried up, and invites her to choke on a trans girl’s dick.

How can anybody imagine that this vicious outpouring is prompted by anything other than misogyny? The hatred of women and disgust at female bodies is palpable throughout these tweets. Several are variants on “JK Rowling can choke on my fat trans cock”. Is it really credible that the persona behind this, who positively exults both in having a “cock” or a “dick” and in the prospect of using it as a weapon to silence a woman, either has a feminine gender identity or experiences dysphoria at having been assigned a masculine one?

I wrote “persona”, rather than “individual” because it occurs to me that some of the most offensive of these tweets may be the work, not of sincere trans rights activists, but of bots or alt-right trolls who relish the opportunity to set feminists and other ostensibly progressive people at each others’ throats. But whoever is responsible for this invective, it’s violently misogynist and ought to be rejected out of hand by anyone who calls herself a woman, whether trans or not.

The clash of identities often leads to irreconcilable and mutually contradictory claims, not just when it comes to questions of sex and gender but also in areas such as national identity. Usually, there’s no impartial, objective authority to whom a final, decisive appeal may be made, so the conflict may be irresolvable. In the dispute between veteran feminists (those who remember a time before adult human females were “women”) and trans activists, most of whom seem unable to conceive of any reason apart from “bigotry” why anyone might want to deny that trans women are female, I find myself uneasily on the side of the former, notwithstanding my self-description as “antimasculine”. This is because, for most of my adult life, I’ve been accustomed to think of gender not as identity but rather as behaviour, specifically as certain clusters of behaviours that were more or less masculine or feminine. In the third part of this series of posts, I’m planning to reexamine my long-held concept of gender-as-behaviour, to see whether it still has anything useful to tell us.