“What is conceivable can happen too” 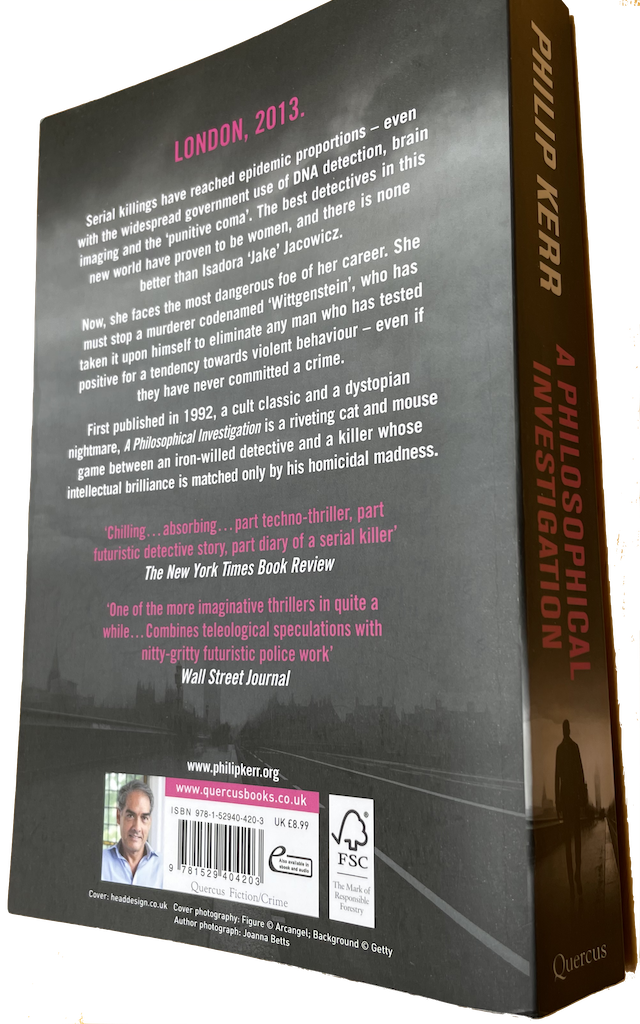 A few weeks ago, I reread Philip Kerr’s A Philosophical Investigation, which I previously read in the summer of 1993. I remembered absolutely nothing about the novel except that it featured a serial killer named Wittgenstein. Even that solitary recollection was misleading: “Wittgenstein” was merely a secret codename, and the character was labelled a “multiple murderer”, or simply a “multiple”, not a serial killer. I might as well have been reading the novel for the first time.

In 1993 I hadn’t yet read Eliot’s “The Waste Land”, so I presumably overlooked the novel’s allusions to that poem, though I must have noticed those to “The Love Song of J Alfred Prufrock”. Now that I recognize “The Waste Land” references I don’t know what to make of them. Some of them seem purely superficial: for example, one victim of a killer whose codename is Shakespeare is named Mary Woolnoth, another Jessie Weston. (Jessie L Weston wrote From Ritual to Romance, to which Eliot refers in the notes to “The Waste Land”.)

I suppose that the allusions are meant to suggest that the novel is set in a land that is sick and decaying because of the shortcomings of its ruler(s); I can’t see any more specific parallels. Eliot had such a different worldview from mine — he was a Christian who thought that human consciousness had changed after Donne, and that the early seventeenth century poet had “felt his thought as immediately as the odour of a rose” — that I long ago gave up any expectation of being able fully to appreciate his poetry.

At least Eliot’s poetry is familiar (though certainly not easy) territory to me; I’m quite incapable of saying what light is thrown on the novel by the philosophy of Wittgenstein. For one thing, I’ve never had the kind of mind that easily (or at all) gets to grips with philosophy. Even with Marx (whose Theses on Feuerbach would have provided the title to this note if I hadn’t decided on Empson’s “This Last Pain” instead) I’ve always found the economics easier to grasp and more compelling than the philosophy.

So, I read the novel feeling all the time that a substantial part of its significance was going right over my head. Unexpectedly, that was not at all an unpleasant feeling, though I don’t usually enjoy having my attention drawn to the gaps in my understanding. This note is evidence of my unwillingness to pass over in silence that of which I personally cannot speak (though others presumably could). Those others have been frustratingly reticent: though the novel is almost 30 years old, I haven’t been able to find any substantial discussion online of its “ideas”.

Detective Chief Inspector Isadora Jacowicz is in charge of a unit that investigates the murders of women, a crime of which there’s an epidemic in the London of 2013. (The novel is set 21 years in the future from when it was published in 1992. It’s been an eventful 21 years.) Jake, a specialist in gynocide, is put in charge of an investigation into the multiple murders of men — a much rarer crime.

It turns out that killer and victims alike have all been identified by the Lambroso project, in effect because of the shape of their brains, as having a particular propensity to violence. Men so identified are offered therapy and medication to control their violent tendencies, and their names are placed on a confidential database which flags them up if they should be involved in a violent crime, but not otherwise.

To the killer, codenamed Wittgenstein, it seems obvious that his murderous inclinations can best be put to use in eliminating the other men in the programme who share his own propensities. At least one of his targets, “Shakespeare”, really is a multiple murderer. Shakespeare notices that he is being followed and confronts Wittgenstein, frightening him off. Ironically, Shakespeare is later killed by Jake, who has shot low, aiming for his legs, and accidentally hit his femoral artery.

Against Jake’s protests, and under pressure from the Home Office, a Professor of Philosophy at Cambridge (best known for his detective novels featuring the investigations of Plato) tries to persuade Wittgenstein that the logic of his position should lead him to take his own life. This doesn’t immediately carry any weight with the killer, who can see that it’s an attempt to manipulate him; but he eventually comes to see the force of the argument. Jake doesn’t want Wittgenstein to kill himself; she’d prefer to arrest him and see him go on trial. On conviction (which is almost inevitable, given the evidence) the killer will be sentenced to indefinite Punitive Coma.

Jake does not herself approve of Punitive Coma:

As punishments went it was worse than a long term of imprisonment and almost worse than death itself. But this is what happened when society had become morally squeamish about capital punishment and when prisons had become too overcrowded and expensive to be practical for any but minor offenders. (A Philosophical Investigation, Quercus Editions paperback, 2020, p. 302)

Punitive Coma is not necessarily final, at least in theory. A Home Office minister tells journalists:

And the best argument of all for PC as the law’s ultimate sanction is that, where mistakes are made — and let’s face it, any system is fallible — a sentence can be reversed. (p. 495)

Of course, someone in a coma is no more likely than someone in a grave to be preparing an appeal or a petition for clemency, or instructing lawyers, so the “best argument” for Punitive Coma is moot. Anybody facing the procedure will know that it’s overwhelmingly unlikely that he or she will ever emerge from it, and that there’s no guarantee that he or she won’t feel anything while in that state, waiting for the end.

Jake examines one of the drawers, “slightly larger than a coffin”, in which comatose convicts were to be stored:

The bottom of the drawer was upholstered in soft black calf leather, which was the only concession made to the prevention of pressure sores. A number of tubes and catheters, which would be attached to the convict’s body, protruded from the drawer’s sides. (p. 489)

Jake’s determination to prevent Wittgenstein’s suicide and instead to play her part in delivering him to this fate might therefore look more like vindictiveness than a simple wish to do her duty. In fact, the book is rather more ambiguous about Jake’s intentions and motivations than this suggests. There’s an implication that her accidental killing of Shakespeare might have satified her previously thwarted desire to kill her brutal father. There are other indications that what Jake feels towards Wittgenstein at the end is closer to sympathy than a thirst for retribution.

When he talks about the restoration “of moral order to a world that was temporarily upset by my crimes”, she answers:

”Any restoration such as you describe would be an illusion, in my opinion,” she said … If I have any explanation at all, it’s that you can no longer distinguish between what is real and what is unreal. But that doesn’t make you so very different from a lot of other people. Nobody cares much for reality any more … Is that what you would call a moral order? If you ask me, there’s not much balance around anywhere. And this — this investigation was just a holding action.” (pp. 503–04, ellipses added)

Is that what makes this story a philosophical investigation, in contrast with the traditional fictional investigation whose function is to restore order to the world? That explanation is good enough for me.