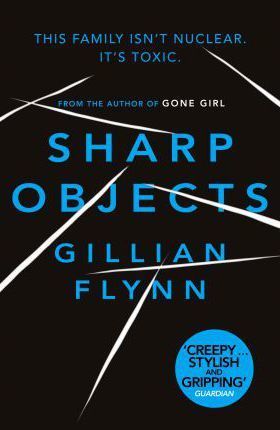 I think it’s unlikely that Gillian Flynn will write another novel as good as Gone Girl. That’s not to say that she doesn’t have a brilliant writing career ahead of her. Gone Girl is an exceptional novel and one could do very well writing books that are not as good as it. But Sharp Objects was her first book, written several years before her masterpiece, though many of its readers, including me, discovered it only as a result of having read Gone Girl.

The later book’s Nick Dunne is a mildly contemptible character, with whom the reader sympathizes only grudgingly if at all. He’s selfish and lazy, with a sense of entitlement but not much empathy. When, well into the book, another character is revealed to be an eventually homicidal sociopath, I thought that Flynn had irrecoverably upset the balance of her story. However much we might have wished to withhold our goodwill from Nick, the fact that he was up against an adversary like that made him the good guy, the one we were rooting for, whether we liked it or not. (In this respect, if no other, he reminded me a bit of Sherman McCoy, the “master of the universe” in Tom Wolfe’s Bonfire of the Vanities.)

I thought the sociopathic character was too monstrous, too far outside the normal range of human venality, to have a place in a story about the mutual damage inflicted by the parties to an dysfunctionally ordinary marriage. Of course I was wrong about that. Flynn proved to be more than capable of keeping her balance while introducing a sociopath into the domestic setting.

Sharp Objects is another story about familial monsters who inflict serious and lasting damage on the people they ought to, and perhaps once did, love. The narrator is Camille, a journalist who has never managed to fulfill her obvious promise. Sent back to her small home town in the “boot heel” of Missouri to cover the murder of an eight-year-old girl and the disappearance of another, she finds herself living under her mother’s roof and getting to know the thirteen-year-old half-sister she’d never really had much contact with. When Camille herself was thirteen, her first younger half-sister had died. For reasons bound up with that death, Camille has a history of self-mutilation. Her entire body, apart from the areas which are visible when she is dressed, and a circle in the middle of her back, is covered with words which she has cut into her skin. By the time of her visit to Wind Gap, Camille doesn’t cut any more — though the temptation rarely leaves her — but she clearly has a drink problem, one that doesn’t stop her from driving, even when it should.

Camille hasn’t been in Wind Gap long when the second missing girl’s body is found — between two buildings in the middle of town. Natalie, too, has been strangled and had her teeth pulled out after death. It seems impossible that the two murders could have been carried out many months apart by a passing sociopathic predator. On the other hand, if the killer had been local, surely somebody would know. It’s largely for this reason that suspicion falls on Natalie’s older brother. The family has moved to Wind Gap after Natalie injured another girl at school, so John seems to be the only one who fits the bill of being both an outsider and in the vicinity when both crimes were committed.

So, the book describes the investigation of crimes that look like the work of an isolated outsider but which finds itself more and more taken up by things that go on inside families at the heart of the community. If I have a reservation, it’s to do with the way the final revelations are handled. The plot points themselves are more than satisfactory, my quibble is with the way Camille as narrator tells us what happened in the aftermath of the climactic action. It’s interesting that the makers of the tv series (on which Flynn herself was one of the writers) chose to handle this much more abruptly. When I picked up Sharp Objects, I hadn’t intended to go on to read the novel that comes between it and Gone Girl. But now I can’t wait to read Dark Places too.