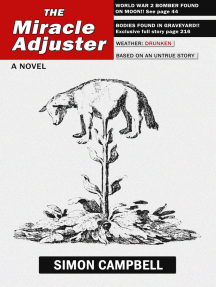 Simon Campbell’s comic style is reminiscent of, and I’ve no doubt influenced by, that of Douglas Adams. Indefatigable wordplay proceeds in tandem with the play of ideas, and the author is constantly alert to the opening up of new possibilities and enticing linguistic directions. it’s a difficult style to master, if one is to avoid losing the reader. The good news is that Campbell has his style under a high degree of control. When, on page 2, I read “I sat alone in the Bangkok Airport Hilton exercise yard”, I was immediately sure that my trust in the writing, at least, was well placed.

Campbell’s title recalls Philip K Dick’s story “The Adjustment Team” and the 2011 film very loosely based on it, “The Adjustment Bureau” but his comic novel doesn’t resemble one of Dick’s tales of a man’s struggle to avoid being deceived by his own consciousness. Instead, we’re in the universe of Torchwood. The narrator, Frank Canon, works for a shadowy organization which, according to one of its unreliable origin stories, was founded by Queen Victoria to assuage public disquiet when, inexplicably, mutton started to rain down on the English countryside. Frank’s job is to fix “continuity errors” — phenomena which don’t fit into the consensus story about the nature of the reality we live in. In the course of his work, he and his colleagues sometimes have to rely on retcon. Other techniques include bribery, blackmail, ridicule, accusations of mass hysteria and the faking of scientific results. And if none of those works, there’s always the “spontaneous combustion” of stubborn witnesses.

Having been set up by Queen Victoria (or at least by somebody) the Agency is now under the direction of the Vatican and its enforcement of a synoptic world view seems to have a religious basis. Why a uniformity of perception should matter to the Church is not a question that is convincingly answered. There’s a suggestion that, just as the church had once set itself against the idea of a heliocentric universe, it has more recently been rash enough to commit itself publicly to a particular interpretation of reality and finds itself compelled to insist on that interpretation, fearing that any hint of uncertainty may lead to rebellion.

Campbell brings in a wide range of cultural and historical reference, from Stalin, Roosevelt and Churchill (not to mention Eisenhower) at Yalta — in this version of reality not merely a photo-op but an occasion for product placement — to the Zapruder film of the Kennedy assassination. There’s also a little known codex by Leonardo da Vinci on “The Joy of Cooking”.

The book’s weakness, for me, is that there’s so little at stake. The situations Frank is sent to deal with don’t seem to amount to very much. More to the point, the story doesn’t make it clear what would be the implications if the “truth” were to become generally known, in spite of Frank’s efforts at concealment. Among the phenomena he’s dispatched to deal with are lambs which are partly vegetable (and so have roots in the ground), a Viking ship lost in an American desert and a glass jar containing a trace of diet jam, encased in prehistoric amber. What is the significance of these phenomena and why do they need to be covered up? I couldn’t say.

Douglas Adams was skilled at suggesting that the absurdity of existence doesn’t give us a licence to stop caring. 42 might not be a very impressive answer to the ultimate question but this did not stop the demolition of the Earth (though not to make way for a hyperspace bypass — that turned out to be just a cover story). Campbell doesn’t yet have Adams’s capacity for making the absurd matter. But he is funny and inventive and can write well enough to deliver the jokes consistently and keep the reader laughing and reading over 341 pages. For now, that’s enough.