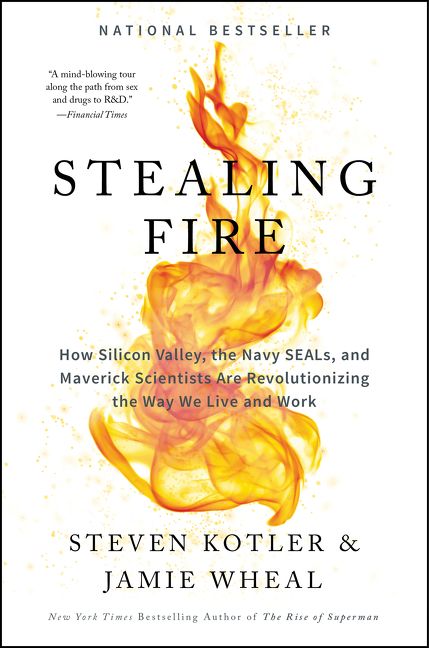 I finished rereading Stealing Fire a few days ago, having first read it in January. On second reading, I had a clearer grasp of some of the detail but my views of the book, which I outlined in a Medium post, haven’t changed substantially. To quote from that post, the book is

about how people are using altered mental states — ecstasis and a sense of flow — to improve their … what, exactly? Their lives, generally, I guess. Their productivity, to start with. In the case of Navy Seals, their ability to function as a unit. For others it might be artistic creation or attempting to improve the condition of humanity or pushing themselves to physical limits.

People in all these fields were finding that “getting out of their heads” in one way or another was helping them to achieve great things. Some people were using hallucinogens to accomplish this but others were using meditation, sensory deprivation, extreme athleticism or one of several other techniques.

(This is not exactly a recommendation of Stealing Fire. I think you should read it, if you haven’t already, but sceptically and with caution. The authors are, in my view, a little too much in awe of some of the leaders of our current crop of giant tech companies, figures such as Elon Musk and Sergey Brin. They’re wildly enthusiastic about Burning Man, but to me they make it sound like hell on earth.)

In other words, I have mixed feelings about the book. What struck me, though, is that my feelings might be mixed but they’re not conflicted. Most of what I’ve been reading recently is fiction. When there are aspects of a novel or other work of fiction that I don’t like, it affects my opinion of the work as a whole. I was interested to find that I could mentally detach the parts of Stealing Fire that don’t appeal to me and still find the book as a whole useful and enjoyable. I can take what I want from it and leave the rest. This makes me to want to read more popular nonfiction.

Many of the people featured in the book are trying to hack the flow, so as to be able to turn it on at will, as if by flipping a switch. On first reading, I had the impression that their aim was to make an altered state of consciousness their normal state. This time around, I see that the authors actually warn against such an approach. “Don’t be a bliss junkie” and “Don’t dive too deep”, they admonish the reader. This reflects the findings of researchers into psychedelic drugs, for example, that a single dose can have very long-lasting effects.

I didn’t make many notes while reading. Two passages that I did mark are both from page 43:

So, unlike the slog of our to-do lists, once an experience starts producing these neurochemicals, we don’t need a calendar reminder or an accountability coach to make sure we keep doing it. The intrinsically rewarding nature of the experience compels us.

Effortlessness upends the “suffer now, redemption later” of the Protestant work ethic and replaces it with a far more powerful and enjoyable drive.

How could anyone resist that?