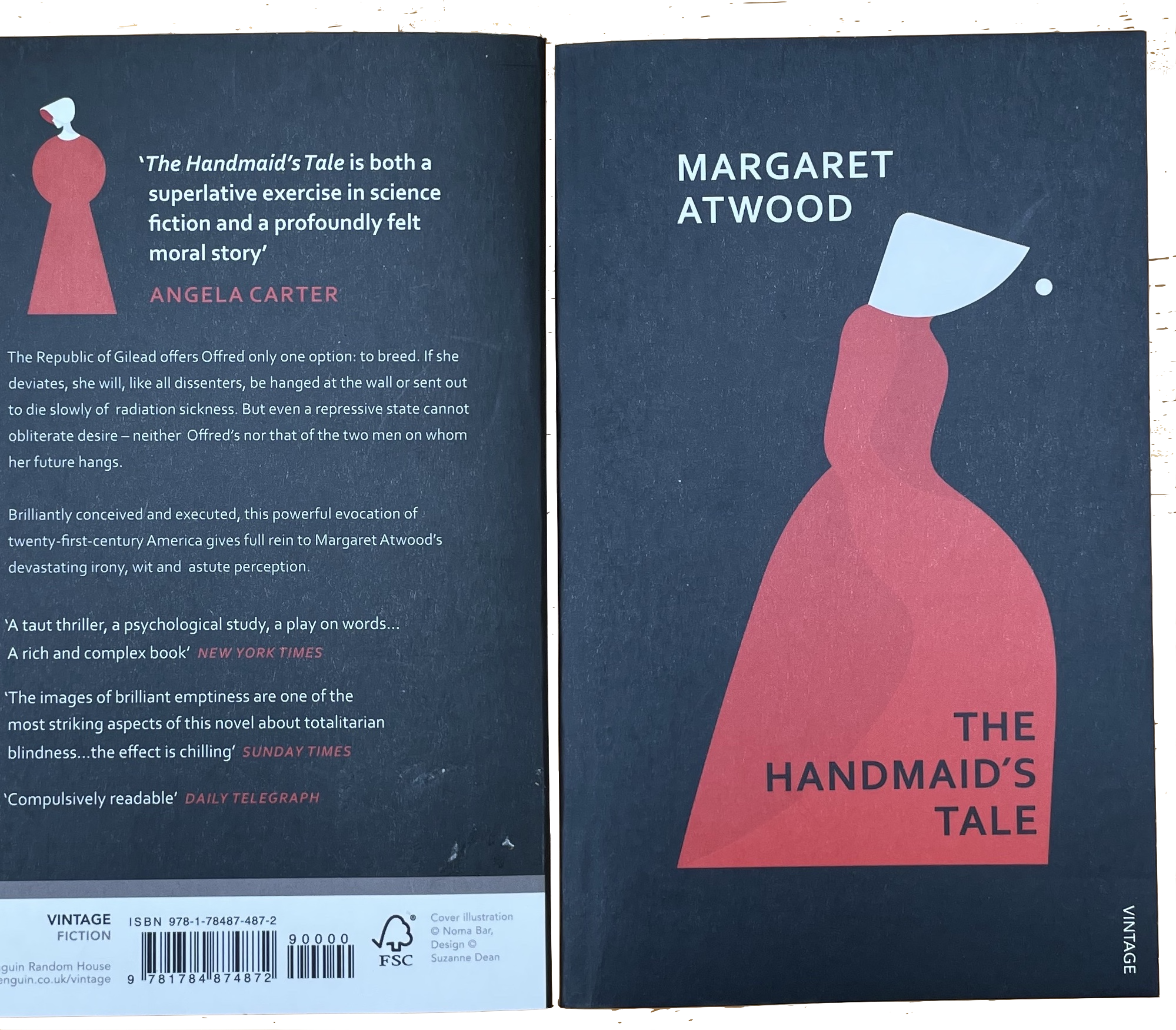 As far as I can remember, I’ve never reread Margaret Atwood’s The Handmaid’s Tale after a first reading over 30 years ago. I was certainly aware of it when it came out in 1985: I’d seen the favourable reviews and noted it as a novel I intended to pay attention to. In spite of that, it was another four years or so before I got around to it. (There was a lot going on in my life at the time: marriage, separation, emigration, taking on a more demanding job than I was used to, buying a home). As far as I can remember, the earliest I can have read The Handmaid’s Tale was 1989. Notwithstanding all the good things I’d heard about it, I was disappointed.

The main reason for my disappointment was that I didn’t find the story’s premise at all credible. Surely, I thought, no one could believe that part of the United States might, in the future, degenerate into a Christian theocracy in which women’s rights and freedom were taken away by law and their fertility turned into a valuable resource under the control of the state?

I’ve never visited the United States, so I had no direct knowledge of the society. What little I knew came from television, books and films. I didn’t, at the time, have any appreciation of what an important part conservative Christianity played in American life and politics. Though Ronald Reagan had served two full terms, and been succeeded by his vice-president, I still thought (wishful thinking) of the Reagan presidency as an aberration.

Though I didn’t recognize the fact till much later, I was in thrall to a late-twentieth-century mutation of the Whig conception of history. I thought that historical progress was effectively irreversible. Democracy and freedom, once experienced, could not be taken away without the kind of political repression that could not be maintained over any extended period of time.

I was not naif enough to suppose that this persistence of democracy was the result of some kind of teleological impetus towards progress. Rather, I thought of the historical process as analogous to natural selection in species: as random mutation led to many variations, some of which would be better adapted to the survival of a species and would therefore be replicated, so social and political changes (however they might have come about) that improved people’s wellbeing and gave them a greater degree of control over their lives would be defended and not easily given up.

In fact, I still believe something like that. It’s just that I’ve come to recognize that the path to the glorious future is uneven and broken up, and may have many detours. As investors learn that the market can stay irrational longer than they can stay solvent, so the citizen needs to know that the government can stay oppressive longer than you can stay alive, though probably not much longer. The good guys will win in the end but the end is, in all likelihood, a long way off.

I suppose that part of my disappointment in Atwood’s novel stemmed from the fact that I didn’t know what kind of book I was reading. Atwood was known as a poet and a feminist. Though I hadn’t read any of her earlier writing, that “positoning” must have given rise to certain expectations on my part. So, what was it that I was reading? I don’t think it occurred to me at the time that it might be speculative dystopian fiction, or that such a thing existed. (I had read Marge Piercy’s Woman on the Edge of Time, which may have given me the impression that feminist speculative fiction should always be expected to tend towards the utopian rather than its opposite.)

Thirty years on, the rise of a conservative Christian theocracy in the US doesn’t seem as far-fetched as I thought at the time. Evangelical Christians have supported the election of a US president who is credibly accused of rape, rumoured to have paid for an abortion and notorious as a habitual adulterer, among other transgressions. We have seen an attack on Congress, designed to overturn the result of an election.

An American theocratic authoritarianism, if it comes, is unlikely to look very much like the novel’s Gilead. That was always to be expected: I don’t read fiction for prediction, at least not as to the material details of everyday life. It may be a more reliable guide to the more general or abstract characteristics of our future polities.

A film adaptation of The Handmaid’s Tale came out shortly after I read the book. (It may be that I bought a copy at last because it was being promoted as a film tie-in.) I found the film even less satisfactory than the novel. It was one of two films that came out within a year or two of each other, scripted by Harold Pinter and starring Natasha Richardson, the second being an adaptation of Ian McEwan’s novel, The Comfort of Strangers. I disliked both films.

In retrospect, it’s clear to me that I was less than fair to Atwood’s novel, and that I ought to consider it afresh. I haven’t watched any of the recent television series, not (entirely) out of disinclination but because I’ve been moving about and haven’t always had access to a television. But I’m quite looking forward to reading the novel as a different reader than I was thirty years ago. I certainly don’t remember many details from the first time, so it will be a new experience. And now there’s also a sequel.