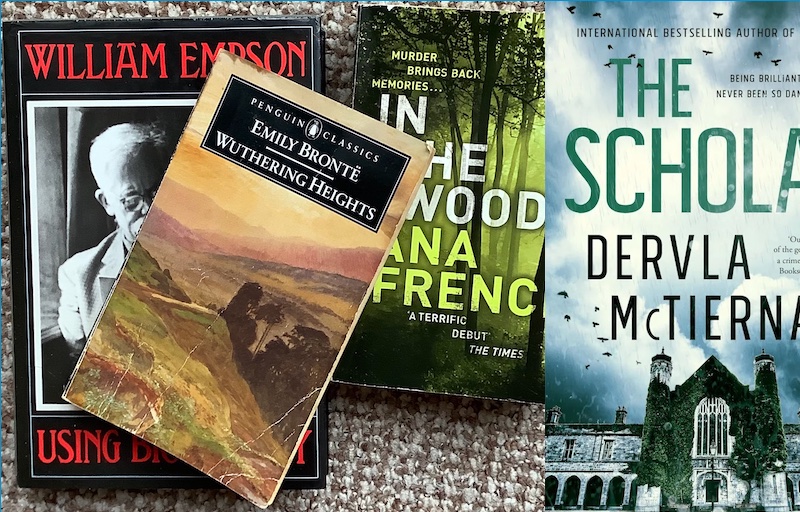 It’s now ten weeks since I started a new email newsletter, Talk about books, and I’ve just sent out the sixth issue: I intended to send one out every two weeks and I’ve found it quite manageable to stick to that. I’m aiming at a fairly in-depth discussion of books, stories and other writing, which usually means that I have to reread whatever it is that I’m writing about. So far, I’ve reread (a) Wuthering Heights (b) a long, hard-to-follow essay by William Empson about a Chancery case involving Andrew Marvell’s personal estate, (c) Shakespeare’s A Midsummer Night’s Dream and an unusual commentary on it, and (d) the first two books in a detective series set in Galway.

In the next few months, I plan to reread Joyce’s Ulysses (and another long essay by Empson), Sarah Waters’s Fingersmith (and, if I can get my hands on a copy, Wilkie Collins’s Armadale), Roisín O’Donnell’s collection of short stories and several books each by Ian McEwan and Salman Rushdie (including, in particular, Midnight’s Children). Not to mention 8 of the books in Michael Dibdin’s Aurelio Zen series.

It’s good to have the fortnightly deadline: I’d tried to reread Wuthering Heights a few years ago but I put it aside because there was no urgency and then got distracted by something else. This time, it was easier. However, the demand on my time has meant that I haven’t been posting either here on Medium or on my own site. By my count, I’ve posted just two pieces on my own site since starting the newsletter and one of those is quite insubstantial. I’m happy enough to dedicate most of my effort to the newsletter until I build up a certain momentum, but I don’t want to let my site fall into disuse, so I probably need to make more of an effort to write something and post it there in those weeks when the newsletter doesn’t come out.

As for Medium, I haven’t really been posting anything substantial here since April 2019, because most of what I’ve written since then that’s suitable for Medium is equally suitable for my own site. I was quite excited by he recent changes that make it possible to customize a Medium profile. I wondered if my timing in starting Talk about books on Substack had been particularly ill judged:

I’ve complained for 3 years that Medium didn’t allow a sans font for body text. Now they do, and finally have background colours, so I sign up for a platform where the editor has a black serif font on a white background, with no customization ¯\_(ツ)_/¯https://t.co/8oQDkT7BMa

But then, just over a month later, Substack too began to allow its users to play with fonts and colours:

I’m pleased to say that #substack is now allowing customized themes). My first attempt uses sans font for body text, fancy serif for headings and F6D0FF as background colour. I may change the background colour but the sans body font is here to stay.https://t.co/U8EY0amzKz

I’m very pleased with my newish Medium theme but I’m afraid it hasn’t (yet) induced me to post more on this platform. We’ll have to see how that goes. In the meantime, here are the first six issues of Talk about books, in reverse chronological order:

Tana French, In the Woods

The compelling start to a unique crime fiction series

This is the first of two posts in which I look in some depth at the first two novels in Tana French’s series featuring detectives from the (fictional) Dublin Murder Squad. In the next issue, I’m planning to discuss the second book in the series, The Likeness.

One of the twentieth century’s greatest literary critics saw, as if by instinct, that scholarly attempts to discredit the woman who claimed to be Andrew Marvell’s widow were wrongheaded, but his attempts to argue against those attempts are hopelessly misleading.

“The more you beat me, I will fawn on you”

An idiosyncratic interpretation may rescue what, at first sight, might seem to be Shakespeare’s most misogynistic play.

I first read Emily Brontë’s only novel in my 30s and was surprised to discover that I seemed to be seeing in it something quite different from what my fellow students were finding.

The Rúin and The Scholar

A police procedural series featuring a male detective sergeant puts brilliant resourceful female characters at the centre of each story.

Welcome to Talk about books

Links to seven previous posts of mine, under the general heading of “book discussion”, intended to give prospective readers an idea what to expect from the newsletter.