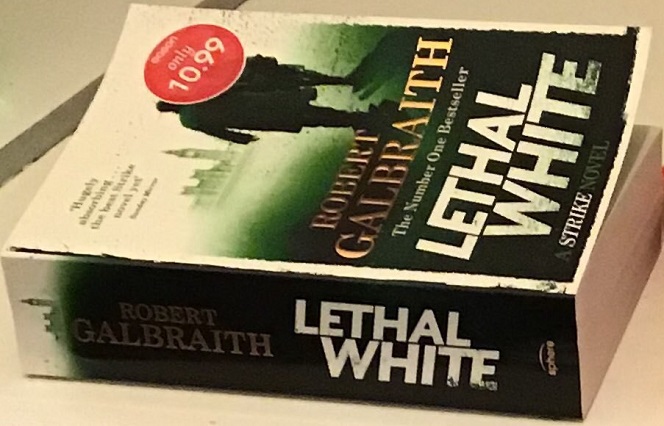 As usual, if your aim is to avoid so-called spoilers, you’re in the wrong place.

Nearly eighteen months ago, I posted a piece on Medium in which I suggested that each of the first three Cormoran Strike novels has at its centre a different trope or subgenre: the underestimated detective in the first, satire on literary London (with grotesque ritual killing) in the second and the misogynist serial killer in the third. Not long after that post, a fourth novel in the series came out. I was curious to see whether Lethal White would bear out my theory that Galbraith was using the series to explore a variety of tropes and subgenres associated with detective fiction.

It’s taken me a while to get around to that. I waited for the fourth novel to come out in mass-market paperback, so that I could avoid both the unwieldy trade paperback and the potentially suspect ebook. Then, having finally read Lethal White, I decided I needed to reread it before I could write anything about it that I’d be prepared to stand over. And, now that I’ve completed the rereading, do I think that my conjecture holds up? The answer to that is a tentative “Yes … and No”. If, as I’ve argued, the first three books have identifiably distinct tropes (or subgenres) it’s clear that the plot of Lethal White has little in common with theirs.

Strike himself is now a figure in the public eye, whose intense confrontation with his ex, Charlotte, in an expensive restaurant in St James’s Street, quickly becomes fodder for the tabloids. There’s no longer much scope for him to be mistaken for a deluded nobody indulging himself by playing at being a private eye, in the mould of Gumshoe’s Eddie Ginley. The satire is muted in comparison with that in The Silkworm and is directed at the political rather than the literary scene. And, while the murderer could certainly be described as a misogynist, and shows the potential to develop into a serial killer, Strike puts a stop to his gallop before he manages to progress beyond a single, male victim. There’s no doubt that Galbraith is continuing the pattern of trying something different in each successive book. The difficulty is in pinning down exactly what that something different is in this case.

There is, as I’ve indicated, a murder at the centre of the plot. One unusual aspect of this is that the murder is central in more ways than one: it takes place just a little before the halfway point of the story (at page 338, where many crime novels would be beginning to wind down). The victim is Jasper Chiswell, Minister for Culture in the Conservative/Liberal Democrat coalition that was in power at the time of the London Olympics. For most of the first half of the book, Chiswell is the client of Strike’s detective agency (in which Robin is now a salaried partner, much to the annoyance of her new husband, Matthew). The Minister is being blackmailed by two strange bedfellows. The first is Jimmy Knight, a left-wing campaigner who was brought up on Chiswell’s estate, and wants payment for some shady work carried out on Chiswell’s behalf by Knight’s father, since deceased; the second is Geraint Winn, the husband of the Lib Dem Minister for Sport, who wants to force Chiswell to resign from office. Robin goes to work undercover in the House of Commons, to try to find something with which to force Winn to back off, while Strike’s new employee, Sam Barclay, infiltrates Knight’s immediate circle.

I described the element of political satire as “muted”; unfortunately it’s a bit heavy-handed at the same time. Della Winn, the Minister for Sport is presented as a somewhat sympathetic figure, isolated by tragedy (her daughter’s suicide), her own (literal) blindness, and a strong reluctance to recognize the possibility that she might be mistaken (she insists that Robin, who is undercover as Chiswell’s goddaughter, is actually a different relative of his who was peripherally involved in her daughter’s death). And most of all, she is isolated from reality by her duplicitous husband. Geraint Winn is a vicious sycophant and a lecherous, self-aggrandizing embezzler. So much for the centre of British politics. The left and right are even less impressive.

Jimmy Knight is a charismatic hypocrite. Well able to address a public meeting or run up an opinion piece for the Real Socialist Party’s website, he seems mainly to use his political activities as opportunities for philandering, a fact of which his girlfriend, Flick, is unhappily aware. He is only intermittently concerned about his mentally ill younger brother, Billy, who initially comes to Strike because he believes that he saw a young child strangled and clandestinely buried some twenty years previously.

Jasper Chiswell has one of those deceptive surnames whose pronunciation is at odds with its spelling. It’s rendered phonetically as “Chizzle” — which means that it is also a homophone of “chisel”, a fact which none of the characters points out — or needs to. Chiswell was once an ambitious young Tory who thought he had a shot at becoming prime minister, but his career was derailed by an affair with a beautiful Italian opportunist named Ornella which ended his first marriage and left him with an unwanted and unloved youngest child, Raphael or Raff.

By the time of the 2012 Olympics, Chiswell has worked his way back into government as Minister for Culture but the once-rising political star has by now become an irascible, blimpish caricature. Age, the demands of his second wife (30 years younger than he), the expense of maintaining a country house, the pressure of having to deal with two blackmailers with different demands, and the embarrassment of having a son (Raphael) who seems unrepentant at having run over and killed a young mother in his flash car while under the influence of cocaine, have all taken their toll on his temperament.

None of the political figures (even the moderately sympathetic Della Winn) is much more than a caricature — or, in Jimmy Knight’s case, a cliché. While I liked the fact that Galbraith had postponed the murder for a substantial portion of the book’s length, and showed Strike and Robin conducting a number of investigations which didn’t centre on violent and sudden death, neither Robin’s adventures in the House of Commons nor the attempts by Barclay and Strike to find out what Jimmy and Flick are up to and where they’ve obtained their information is really substantial enough to support the 45% of the narrative that has elapsed by the time Jasper Chiswell breathes his last.

When one of the potential suspects in a murder case has a conspicuous alibi (as Jasper’s second wife, Kinvara, has been careful to establish) and another has obviously nothing to gain (Raphael was perfectly well aware that he had been cut from his father’s will), it’s a reasonable conjecture that the two are cooperating to bring about the desired end of the victim’s life. So, it’s not exactly a surprise when it turns out that Raphael and Kinvara have been having an affair and have plotted together to murder their father and husband respectively.

The motive for his killing is a painting that might be by Stubbs (and if so worth tens of millions), of a mare mourning her pure white foal, who had been suffering from lethal white syndrome. Only Jasper and Raff had been aware of the painting’s potential value, and Jasper wanted to sell it to stave off his financial difficulties. With Jasper dead, Raff could take the painting for himself and compensate for his exclusion from the will.

The plot is complex and composed of many disparate elements: a second painting whose description could plausibly be taken to refer to the putative Stubbs, a Polish house-cleaner whom nobody had seen, a credit card stolen from a housemate of Flick’s who had no apparent connection with the murder, a case of champagne delivered to Chiswell’s town house, though he would never drink champagne, a house key passed to a homeless man in Paddington Station: the pieces fit together like a large, well designed jigsaw, with only Strike able to see the outlines of the picture before it has all been put together. He teases Robin about her inability to make sense of the clues.

So, while it’s clearly the case that Lethal White is a different kind of detective story from its three predecessors, each of which in turn is of a distinctly identifiable type, it’s less easy to pinpoint precisely what type of crime fiction Lethal White is. The second part of the novel, the murder and its resolution, can be seen as a well worked-out example of the clockwork plot. However, the first half of the book which, taken with the epilogue in which the relationship between the land-owning Chiswells and the proletarian Knight family is brought into the foreground, seems to be attempting to frame the murder plot within something more momentous — perhaps a state of the nation novel. However, as I’ve already suggested, the political portraits — Chiswell the Tory, Jimmy Knight the socialist agitator and Geraint Winn the ineffectual Liberal Democrat with inflated ideas of his own importance — are too unsubtly drawn for a novel about their doings to be very compelling reading.

And maybe that’s the point. Perhaps Galbraith is suggesting that British politics is too caricatured, too lacking in nuance and surprise, and too impoverished to form the basis of a novel without the mechanism of a well structured, finely tuned clockwork murder plot to drive it. The great secret that Jimmy Knight is holding over Jasper Chiswell’s head, the basis for the blackmail, is that Chiswell has been exporting traditional gallows, lovingly hand-crafted from English oak, to repressive regimes abroad. Artisanal implements of torture: the idea is at once absurd and horrific, the more so since one set of gallows has been hijacked by insurgents in Zimbabwe, resulting in the execution by hanging of a teenage boy. That’s the punchline of Galbraith’s state of the nation novel: quaint absurdity works as a cover for brutality and horror.

It could be said that this yoking together of savage political commentary with the smoothly turning mechanism of the mystery plot ought not to work — and my impression on first reading was that it didn’t, quite. On rereading, I was more engaged, admiring the integration into the plot of details I hadn’t notice the first time.

At 771 pages, Lethal White is a very long novel and there are aspects of the book — notably the chapter epigraphs from Ibsen’s Rosmersholm, the recurring white horse motif and the sexual politics, including the merciless depiction of Strike’s ex, Charlotte — that I haven’t attempted to discuss adequately, or at all. It is, I’m convinced, a book that rewards rereading, and it’s quite likely that I’ll go back to it in future. But not, I hope, before Robert Galbraith produces a fifth episode in the series.

Thanks for reading. If you’d like some more book discussion and literary criticism by me, I’m now sending out a newsletter, Talk about books, every two weeks, containing exactly that. Follow the link to sign up.